For the second year in a row, Luke Plummer and I headed down to Collegiate Mountain Bike Nationals, this time in Beech Mountain, NC. Instead of making the trip  alone, we joined up with Northeastern, BU and RIT in a single 12-passenger van for the 17ish-hour car ride.

When I packed for Nationals (the night before, of course) I neglected to check the weather. It being North Carolina (that’s pretty far south right?) I assumed it would be pretty warm, but somewhere around Pennsylvania it started snowing. Apparently at Beech Mountain, they were supposed to get a few inches overnight, with race day highs in the 20s. So much for that, I guess. Sure enough, we arrived many hours later at our condo with a solid couple inches of snow on the ground. Figuring there wasn’t much to do about it, we hit the hay and hoped for the best for the short track in the morning.

Waking up, we found the snow situation pretty much unchanged. 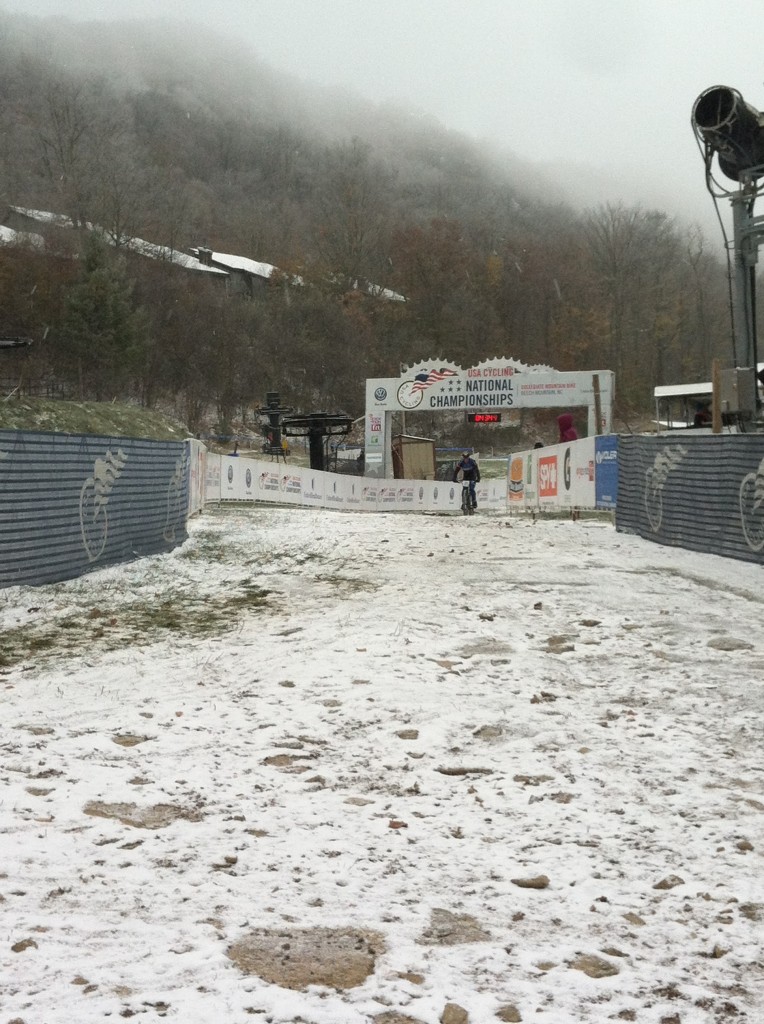 Fortunately, we weren’t first to race so there was some time for it to warm up, but it was still pretty cold. The short track course was basically a ‘cross course, just where you didn’t have to get off your bike. It had a grassy climb, with some turns in a field, and the last couple berms of the dual slalom course. The thing about short track at Nationals is that you get pulled when you’re within 80% of the leader, so for me that means that I’ll be racing about 10-15 minutes, making the whole race basically a sprint. This year, I was happy to get to ride one more lap than the year before – I definitely felt stronger and a lot more competitive thanks to Constantine’s coaching.

After watching some ECCC comrades in the women’s race and a regain-feeling-in-everything break, we headed back out to preride the XC course for the following day. The course begins with ~500’ of climbing up a snowy fireroad, at which point it heads into the woods after several hundred yards of tarmac (ewww). When we prerode, the course was still snowy from the night before, but the cold temperatures had rendered it pretty crunchy, and remarkably smooth with pretty good traction. Despite living in New England all my life, I’d never really mountain biked in the snow before so it was a pretty cool experience, and the trails were pretty fun. For the sake of everyone, we actually hoped the snow stayed for the race the following day, else we’d have to slog through the inevitable mud. The descent was also pretty excellent, with some nice and icy berms to boot.

The following day, we started our XC race bright and early. I had a pretty good start up near the front of the pack, but was almost immediately caught behind what seemed like a road-style crash, with people and bikes all piling on. Unfortunately, this meant I started at what felt like basically the back of the pack. Fortunately, the holeshot was the entire climb away, and feeling strong I passed a bunch of people up the still-snowy ad slick climb. All these long climbs in races made me glad I put my 2×9 rings back on, and after the race, Luke actually admitted he could have used more gears. Anyhow, after working pretty hard on the climb and the road section, I finally got into the woods. It would seem that the snow had melted a bit and refroze, so the riding was a lot more slippery than our preride the previous day, and I just felt all over the place in terms of handling. Still, it was pretty fun to get loose in the snow, and I caught a few more people. Coming down the descent the second time, however, I crashed pretty hard and had to straighten out my bars. Unscathed, I continued down to the finish, ready to ride one more lap, but a marshal waved me through the finish and off the course. Confused, I learned that I had been pulled because I had been lapped by the DI leader, not by the leader of my field. I was a little bummed, since I had saved some energy for the last climb and think I could have caught some more people, but happy enough to get out of the cold.

During the day, it warmed up and we headed back out to the course to spectate the women’s race and downhill. We found a great corner by the top of the descent 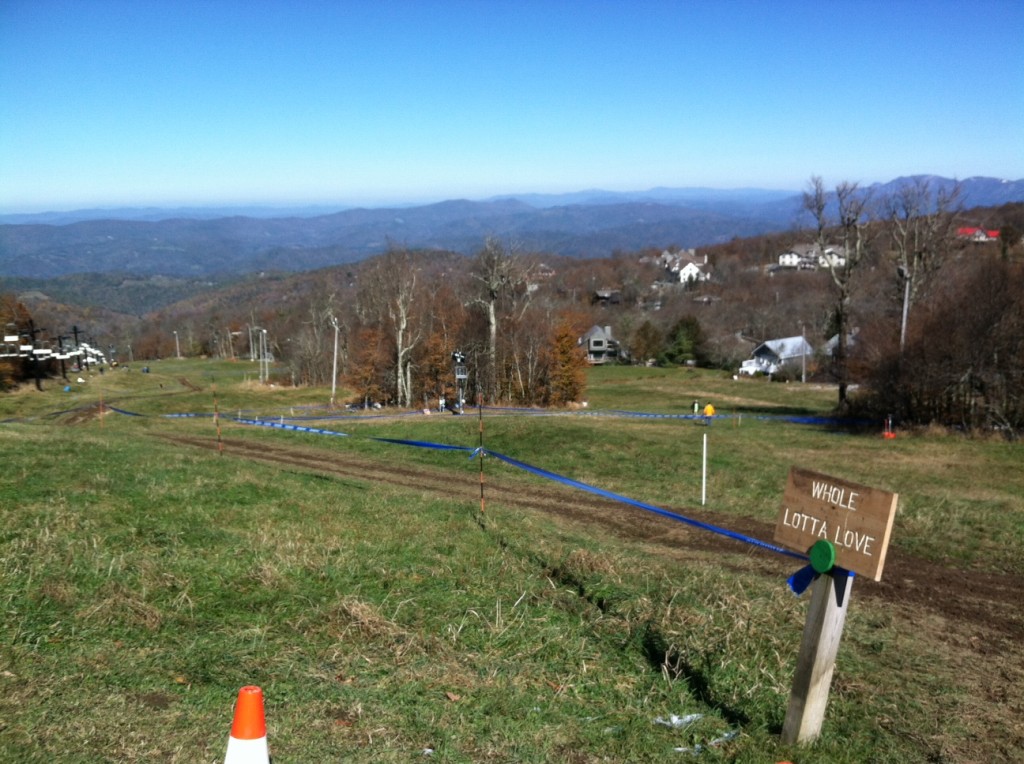 Joined by UVM, NU, and RIT, we got a pretty excellent ECCC heckling crowd going as we watched the women slog up the now-muddy climb. After a bit more heckling, grilling and American flag-waving, we headed over to the downhill course to watch people rip through the rock garden. This time though, somebody actually took one of our hotdog handups! A UVM rider had qualified in 1st in D1, while a couple Wentworth guys were up there in D2, and even though they didn’t manage to keep the win, they made it to the podium and it was pretty cool to watch them represent the ECCC.

I had a great time representing MIT and the ECCC at Nationals this year, and my only disappointment was not being able to find the legendary nationals crit (I brought my skinsuit 😉 ). What really made it special was to be able to hang out with all the other folks from the conference from NU, RIT, UMass, UVM, and BU – racing’s a whole lot more fun when you’re doing it with a bunch of friends.

Thanks for the opportunity, and see you out on the bike!