Track cycling is one of the most dynamic disciplines of cycling with events that challenge athletes not only to overpower their opponents, but also to outwit them. Cyclists ride counter-clockwise on fixed gear bicycles without brakes on a 250m or 333m oval “track” or “velodrome” with banking up to 55 degrees.

“Apart from racing, just riding on the track is flat-out fun!” says Spencer Daniel Schaber G. “The 45 degree banking is daunting at first because you have to ride 17 mph just to stay on it, but after getting the hang of it, it’s like a roller coaster.”

Katherine A. Wymbs ‘14 was pure enthusiasm at the event: “Nothing quite compares to diving into the sprinter’s lane from high on the banking like a lightning bolt into the Flying 200 [meter time trial] and maintaining speed around the [final] turns!”

The Collegiate Track National Championships consists of seven events across three days: some events are performed solo (long and short individual time trials called “pursuits,” and matched sprints), some raced as a team (team pursuits and the co-ed sprint), and some against all other athletes simultaneously (points race and scratch race).

With a record turnout of 120 riders, the MIT team had to rely on each other to ensure teammates were ready for their races. Schaber says he “repeatedly swapped aerodynamic wheels and handlebars, changing chain rings and cogs to get the optimal gear ratio for each event.”

Notably, Christina Marie Birch G clocked 4:03 for a 3-kilometer individual pursuit, earning a fourth place medal. Michael Lane Garrett G earned 7th in the Flying 200-meter time trial by completing his sprint in under 12 seconds. Zachary A. LaBry G and Garrett placed 8th and 10th respectively in the men’s 4-kilometer individual pursuit, only a second apart with times of 4:58 and 4:59.

The women’s team, comprised of Birch and first-year track cyclists Wymbs and Edrie Buenaventura Ortega G, finished the 3-kilometer team pursuit first among teams fielding only 3 out of 4 possible riders. The men’s team included Garrett, LaBry, Schaber, and Zachary Seth Hartwig G, and finished 10th in the men’s 4-kilometer version of the event.

Each day the team arrived at the track before sunrise, warmed up under stadium lights, raced until 3 p.m. in increasingly hot conditions, only occasionally with a 1-2 hour break for lunch and air conditioning, and then returned to the track at 5:00 p.m. for racing well past nightfall. Wymbs confessed MIT’s secret for success: “I think that one of the reasons MIT did so well as a team was that we have more experience than other teams at operating on less than eight hours of sleep.”

Garrett, by far the most experienced track cyclist of the troupe, noted that camaraderie was at the heart of the MIT victory. “It was great to have seven riders who gave each race 100% and then spent the rest of the time supporting their teammates — truly an MIT team effort.”

USA Cycling will remember MIT’s gold-winning performance on the track as well as Ortega’s breathtaking rendition of the National Anthem on the final day of competition. Ortega is a newcomer to track cycling but already understands many of its nuances: “It takes more than having the strongest riders to win. It takes patience, control, and awareness to take the gold.”

The MIT Cycling Team’s victory would not have been possible without the generous support of the MIT Club Sports Council and sponsorship by FXDD, Thoughtforms Corporation, Schlumberger, The Branta Group, and Exponent.

This weekend I learned that racing in men’s B is a lot harder than men’s C!  After having my confidence boosted by getting 13th (5 omnium points!) in the ITT, I was pretty excited for what would happen with the (uphill finishing!) circuit race.  I felt like I kept pretty good position throughout the circuit race, being around 10th wheel or closer to the front (but not on the front!) for most of the time.  I was trying to race like the weakest rider.  When we turned onto the finishing climb and I was still about 10th wheel, I had the first hint of leg cramping—while many others zoomed by me I was a bit conservative to avoid having my legs completely seize up.

I guess my body is not quite used to 90 minute races yet or I need to manage eating/drinking better.  I got 29th, finishing a few seconds behind the front pack.  The crit was one of the most fun races I’ve done in a long time.  The highlight was sitting in behind Chewie sometimes –it felt like having coached laps in a clinic, but with the full race experience!  It was great to try to mirror how Chewie conserved energy with smooth power delivery while many others were frequently standing up to hammer.  The 2nd highlight (lowlight?) was that in the final lap, things got really sketchy and I had two near-crash experiences. It was the scariest race I think I’ve ever been in, in addition to one of the most fun.

We headed out to the Yale race course, competing for the title of “King of the Mountain.” They advertised their ITT and the end of the circuit race as a terrifying, steep, long hill. Yuri said that it wasn’t really a hill, but upon arriving, it certainly looked like one to me!

ITT: The individual time trial was a 4.2 mile course, winding around a park and some neighborhoods for the first few miles then climbing up to the top of the “mountain” for the finish. Luckily, the hill wasn’t very steep at all, though it was a bit long. I raced in the Women’s C category this weekend, and the field was quite large for women – 40 racers! We left at 15 second intervals, and until we reached the hill, I only passed one girl; I felt tired all week and was resigned to a somewhat mediocre race, since I’ve never been very good at hills. However, upon starting the climb, my weekly hill repeats began to kick in, and I passed five more riders before the top to take second place overall. I liked the time trial, since it reminds me more of a triathlon (blasphemy, I know), with no one to compete against except my own pace. 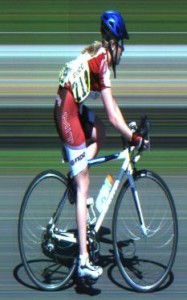 Circuit: The circuit race consisted of several ~3 mile loops with minimal hills, followed by the mountain to the finish. At the beginning, I got up into a good position near the front, and we basically had a rotating paceline of the first ~5 riders for most of the race. There were two strong Yale girls, and two UVM girls, so occasionally they would pick up the pace or try to break away, but overall the first 3 laps were fairly uneventful except for one big crash (behind me, thank goodness) that took down around 8 women and forced some of our other MIT riders to slow down for a while. On the last lap, we picked up the pace, and upon starting the hill only had the strongest/luckiest riders remaining close by. One girl attacked, and I stayed with her, while the others fell slightly behind so we were all pretty strung out. I was climbing and thinking “Wow, this is great, I’m going to get second in a hill climb! Awesome, I’ve never been very good at hills!” And then I looked over and realized that the girl next to me looked like she was about to die, based on how hard she was breathing…so, I broke away, about 400 meters from the finish, and sprinted through to get first. It was very fun to actually win a race, and made me REALLY glad I’ve been working so hard on hills recently.

Crit: Sunday morning I woke up with burning, exhausted legs. Great. However, after a long warmup, I felt ok again. Kristen, Katie, Liz and I were all entering the crit together, so we decided to try to work together, if possible. Upon stepping into the second row of the starting line, the girl in front of me turned around and said, “So, you’re the KOM? Or QOM, I guess.” It took my MIT mind a while to understand the acronym, but yes, I was the “King of the Mountain” from the previous day (and I won a jersey!!!). Uh-oh…now I couldn’t pretend to be weak and say “Does someone else want to lead right here? I’m not very fast on the uphills…” – verbatim what I said during the circuit race. So that was how the race went, with girls being much more aggressive than before, attacking frequently, and trying to box me in so I couldn’t catch up again. It was exhausting, and my first C crit. I couldn’t ever tell which laps were primes and once sprinted for something that wasn’t actually one. Liz and Katie both did well in some of them, though, and Liz broke away very nicely once. By the end, I thought it was just going to come down to a huge pack sprint and I would die because I was so tired. Luckily, some of the other girls sped up immensely during the last couple of corners, so it got was more spread out before the final stretch. It took me a while to get the energy to stand up and sprint, but I did pretty well in the downhill finish and got second (behind the same girl who outsprinted me in my first Intro crit). Kristen passed a ridiculous number of riders in the sprint and ended up in 8th, which I thought was pretty cool, and Liz came in 6th. Added to Yuri’s win and Martha’s 2nd in the Women’s A, we basically dominated.

Very fun weekend, and congrats to everyone who raced!

Although MIT were the only ones on Saturday to race (aside from the illustrious Nick Bennette) in the men’s collegiate section, Army showed up today for the match sprints, scratch racing, and team sprints (and bailed on the team pursuit). It would be fair to say that in the men’s A (of which we had one and they had one), Mike gave them a solid pounding. It would also be fair to say that in the men’s B (us four, them five), we totally and utterly crushed them. While the first of the collegiate match sprints saw me take the lead in a four up against 3 Army rides, alas the finale came down to a three up between me, Nick Loomis and Chewie (I did my best to shake those two off, but Loomis has a mean sprint). The scratch race was similarly a 1, 2, 3 sweep for MIT. And they were similarly demolished in the team sprint.

Yeah, the MIT Cycing team is that badass.

Oliver Seikel ’59, who wrote to tell us in June about his 800-mile trip back to his 50th reunion, had his feat featured on CNN!

After more than two months on the road, Amelia Servi and Roxana Safipour have just arrived in California, and it looks like they had a great time. 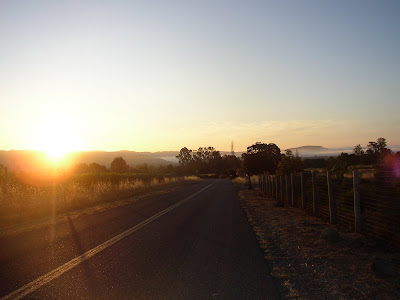 Read all about their trip at safipour.blogspot.com.

Last Saturday, five MIT cyclists (well, four cyclists + one alumna) headed to South Boston to volunteer at a kid’s bike rodeo. The event was designed to teach kids and parents about bike safety, handling, mechanical tips, proper helmet-wearing, and how to steal the wheel of a good lead-out train (joke).

It was organized by our fearless and incredibly hard-working coach, Nicole Freedman, who happens also to be the City of Boston’s bike tsarina. Everybody had a good time, and I am pretty sure I met one 5-year-old  named Benjamin who will win the national cyclocross championship in…2022. Stay tuned, I suppose.

Anyway, pictures of the event are up on our Flickr page (which you can also preview to your right).

This is the elevation profile of Bolton Road, the “3D” in the X-Pot 3D road race, voted the ECCC’s most “soul-crushing” climb.