UPDATED: John Frey has posted updated season overall standings after the Philly weekend.  MIT maintains its lead in the season, with UPenn closing quickly and UVM hanging around in 3rd. 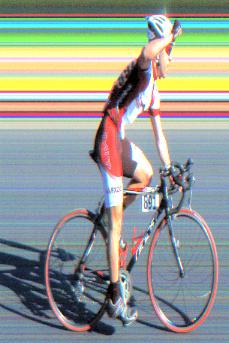 * Zach Ybarra taking off solo in the Men’s D crit with just over a lap to go, and finishing in style, well ahead of the field.
* Martha who lived up to the “Super Fast” title printed on the front of her new sprint leader’s jersey in the crit. UPDATED TO ADD: Martha has taken the series lead from Anna McLoon, and now holds both the sprint leader’s and series leader’s jerseys (“Super Fast” + “Series Leader” = “Super Leader”).
* Glenn Ferreira in the TTT.  I don’t think I’ve ever seen anyone dig quite that deep in a time trial.
* Yuri, who was too polite to sprint around Martha at the end of the crit.
* John Rhoden who refused to quit in the Men’s A crit.

With that, on to the race report…

The morning started with TTTs.  Lots of them.  MIT fielded four teams and a composite team with NEC in the Women’s B.  All in all, good results considering many riders had to race up two categories in the TTT.  The Women’s A of Zuzka Trnovcova, Martha Buckley, Stef Sydlik and Yuri Matsumoto, took first place in good MIT fashion.  A bit of early morning miscoordination, and the Men’s A team was unable to pre-ride the course.  Last of the Men’s A team, Glenn Fereirra was standing at the line, looking somewhat lonely as Allan Atwood gave him the fifteen second countdown and John Rhoden and I were just rolling up to the line.  Some last minute modifications to the course made for a surprisingly technical start, but we coordinated and got into a rhythm down by the river.  Not our finest moment, but we made the best of our collective fitness that we could.

The circuit race included the same ridiculously technical starting section, which through everyone one off kilter every time through.  Past the tight, off-camber, dust-covered, traffic cone ridden, downhill turns of the start, the course flattens out along the river, climbs gently into the hill above (and not so gently at the end), before sending riders down and windy slope, with the most perfectly cambered turns of any race in the ECCC.

In the Men’s B, there were attacks on almost every lap and each time, they contained riders who had the strength to make it stick — UVM, Dartmouth, Princeton, and BU all had riders represented in some of those attacks.  Each time a threat went off, I went with it, gradually whittling down my own reserves, and not one of them amounted to anything.  I decided to take off near the bottom of the finishing pitch on the last lap.  Somewhere near the top, as the field was starting to pull around me on both sides, it sunk in exactly how foolish it had been.  I navigated the final stretch somewhere at the back of the pack, and stayed there squarely through the rest of the sprint.

With one race down, I circled the lot, left my collegiate numbers with Adam, and staged at the back of the hundred-strong Men’s 3/4 field.  Naturally, it didn’t really occur to me before this moment that about ninety-five of these folks had not just done 25 hard miles with a nice time trial to warm up.  My plan was simple: stay protected in the pack and don’t do anything stupid… at least until the end.  Sadly, the strength-to-sense ratio in a Men’s 3/4 field is greater than unity, and attacks started going off immediately, for no particular reason.  I clawed my way to the front of the pack, at least for a bit.  I then exploded fairly spectacularly, and hooked up with a couple other B riders who had also exploded spectacularly.  Coming in near the finish, I had the following exchange with a rider from Carnegie Mellon:
“Are you going to keep going?”
“Ha!  Six laps is enough for me.”
“Okay then.  Sprint for glory at the line?”
Well, I took the sprint in style, raised my arm in victory, rolled off the road, and collapsed in the field and just lay in the sun for a while.

Everyone seemed to have an exciting race, with some pretty good results, but I’ll let you ask them for the details or check Velocity Results and move onto the action on Sunday.

The Men’s D squad had been plotting a major coup for Sunday’s crit, but when Spanish officials found a file marked “The Ladies Man” in possession of Operación Puerto doctor, Eufemiano Fuentes, potentially linking John Rom to the international doping ring, John and Brent were delayed.  After the PA State Police searched their car for EPO and CERA on I-76, John and Brent were eventually released, after the search turned up nothing more than “The Ladies Man’s” aphrodisiacs.  Although cleared of Operación Puerto involvement, they rolled into the parking lot just minutes after the start whistle was blown for their race, and the remaining Men’s D riders, Adam, Zach Y, Mattheiu, and Tony were forced to improvise.

With three of them — Adam, Zach  and Matt — all near the front, MIT had a clear control over the race, a point that was punctuated as the trio scored points in the race’s primes.  The Men’s D plans were further thrown into chaos when Adam suffered a mechanical malfunction and was forced to abandon.  As conference director, Joe Kopena, readied himself for the traditional ringing of the “One Lap To Go” bell, the pace car crossed through the finishing stretch with a solo rider, Zach, opening a gap between himself and the pack as his teammate Matthieu blocked  at the front of the pack.  After waiting less than two minutes, the pace car came around the final corner for the last time, and a lone rider wearing MIT colors appeared around the corner.  Zach went for the slightly understated, single clenched fist for his victory salute as he crossed the line uncontested.  Not to be outdone, the rider in second place gave a spectacular victory salute to the slightly perturb sound of Joe Kopena telling him to keep his hand on his handlebars when he finished.  Rounding out the points for MIT, Matthieu took third in the field sprint for a fourth place overall.

Nate Dixon and John Rom, upgrading for the day after his encounter with the PA State Police, faced the formidable Men’s C pack.  With a bit of a rough start, both of them found themselves toward the back of the field a in very strung out and fast field.  Both fought their way up as far as they could in the few laps that they had to do it.  At the end, John said he felt good in the C’s, but wants to stick in the D’s until he gets that elusive victory.  Brent, who raced Men’s Intro, came in fifth, scoring himself his first points for the season.

The Women’s A/B was dominated by the epic battle between Martha Buckley in the “Super Fast” green sprint leader’s jersey and Harvard’s Anna McLoon in the “Series Leader” yellow jersey.  Despite Anna’s attempt to grab point and take Martha’s jersey, all but one of the race’s primes went to Martha, giving her a secure lead in the “Super Fast” jersey (not that any of us who’ve ridden with Martha can forget that she is super fast).  In the last lap, with Yuri securely on her wheel Martha set the pace, giving Yuri a strong leadout.  In the end, though, Yuri was too polite to accept the leadout, taking second to Martha.  At the end of the race she claim, “I didn’t want to outsprint her.  She did all the work on the last lap!”  Stef, who is starting to get comfortable with this “sprinting” thing had a strong finish in the pack, but sadly, NEC’s entire women’s team crashed out with only a couple of laps to go.  Fortunately, Ali was okay, suffering only a few bruises.

The Men’s A race could simply be described as “fast”.  Glenn and John started well, but with gaps opening up, and the pace being driven by UVM, Glenn found himself caught out.  Later in the race, as UVM continued it’s strategy, which seemed to involve sending someone up the road on a flyer every half lap, John was gapped off the back of the pack, but stayed with it, finishing solo, in no man’s land, after a hard fought battle again some strong dudes.

As for my race in the Men’s B, it went well.  I think.  At least, that’s how it seemed to play out.  I lined up with Sing Sing on my right and a Columbia rider on my left.  When the whistle was blown, the Columbia rider went off like a rocket.  I have no idea why, but the pace never let up.  I defended my position as best as I could, marking the strong Penn State and Dartmouth riders on the front as well as Aaron Horvath of Princeton, one of the strongest guys in the field.  I never let myself go farther back than tenth or maybe twelfth, advancing when I could, dodging crashing riders when I needed to.  Although technical, this was not a course where it was easy to make up places in the turns.  If you didn’t pedal through the turns, a gap opened up.  If you did, you risked crashing.  In all, I counted four pedal strikes during the race.  Most of the race was somewhat of a blur.  I have no idea who was behind me, or how many there were at any given time.  With three to go, the fifth and sixth positioned riders crashed each other out, and I had to dig deep to close the gap opened after I avoided them.  When it came to the sprint, well, I was still there, so I sprinted.  Being a little out of it, I stopped at the first cross walk, not the second, which was the actual finish line, conceding one place to Aaron to come in tenth.  But all in all, I’m happy.  If you want to know what the race looked like, you’ll have to ask someone else.  I have no idea.