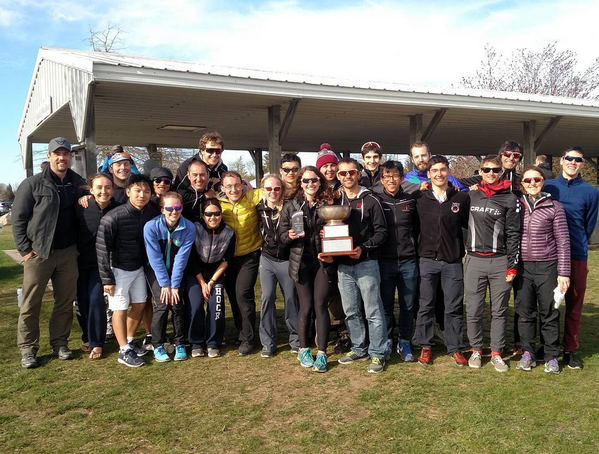 And thus it was the last ECCC race weekend of the season, a bit too quickly if you ask me. Easterns this year was hosted by RISD and Brown and was only an hour drive away, so we had 27 racers come out, including a few first timers! On the agenda was the usual TTT and road race on Saturday and the crit on Sunday. Two dirt sections on a chilly and rainy day made the road race course very interesting!

Here is a recap of the weekend from Amanda:

“TTT: This was Kate H’s first ever race, and we had a 4-person Women D team! Despite there being no other Women’s D teams in the line-up, we pushed hard and put in a solid effort. Unfortunately, we weren’t able to keep our team of 4 together for the whole course. We dropped Kate within the first mile, and then I dropped off around mile 5 of 13 on an incline. Amy and Em pulled strong to the finish, and we ended up beating the 2nd place Women C TTT time.

RR: Sometimes being in cold rain triggers unhappy memories of this course. Previously unable to climb at a respectable speed, I surprised myself during this race by managing to move up in positions on some climbs! However, I still solo’d most of the race because I slowed down too much in the hole-y mud segments around mile 8 and wasn’t able to chase back onto the pack. In the end, Amy took 3rd, while Em and I came in 16th and 14th, respectively, in a field of 23.

Crit: *Turns* (ha) out that I’m too scared to corner in packs, and my Army crit strategy to string out the pack by hammering at the front & up the punchy climb doesn’t work quite as well on a flat course. The headwind we had witnessed in the morning races flipped, turning the sprint finish segment into a tailwind, and a straight segment after two quick turns into a fierce headwind. I spent most of this race yo-yo’ing off the back in those turns and trying to push through the headwind to catch the pack. The main pack raced together toward a huge 17-member sprint finish, with Amy earning 2nd place and some prime points!

As a highlight from the Women D field, Amy also got 1st overall for the season, beating out a girl from UVM by 6 points. As a team we also won the season and weekend omniums! It continually baffles me that I originally came to MIT to do science and joined the cycling team just to exercise, but instead happened upon a very inspiring group of top-notch cyclist-scientists that make me want to race at a more competitive level. Suffice it to say, I have a long way to go, especially since I’d just started cycling (outside of commuting) this past November on a trainer, with most of my outside miles actually at these ECCC-sanctioned races. I’m looking forward to a summer full of training to build fitness and drop some of those pack riding fears in preparation for next year! “

And the report from Tori:

“At the start line of the Women’s A/B road race, the conditions weren’t looking too promising – it was cold and raining, and no one was sure what to expect from the course’s two dirt sections, especially given the wet conditions. But the team went into the race with the idea that we’d make the best of it, and it turned out to be one of my favorite road races this season. As expected, the dirt sections were tough, but more manageable than I had originally anticipated. For most of the race, I was in a group with 10 or so other riders, including Anne. Emma was up the road in a breakaway that had gone during the second lap. Anne and I were riding next to each other in the pack, which gave us a chance to strategize and organize a leadout for the final sprint. Anne executed the leadout perfectly, and I came around her just before the final corner, and managed to win the group sprint. And Emma had hung on for 4th! Then it was back to the hotel to give our bikes (and us, of course) a good washing before Sunday’s crit.  “

This weekend was a fantastic way to end our season. I could not have asked for a better season and enjoyed every minute of it with all of my amazing teammates. Thanks for an awesome season, everyone!!