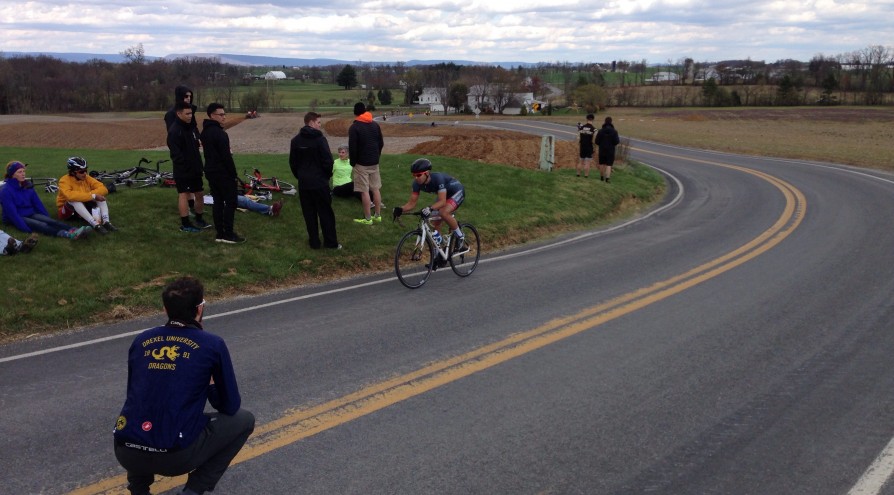 Seven racers – Emerson, Jen, Justin, Katy, Lucy, Paul and myself – took a long eight-hour drive into the unknown this weekend to race at Shippensburg. None of us really knew where Shippensburg was, what it looked like, or what the races would be like. For the first time in living memory, no-one on the team had raced there before. It turned out to be a fantastic weekend of racing, as well as the team’s best performance yet this season.

Saturday’s main feature was a circuit race, where the winds blew very fiercely over the open farmland. The course was about 2 miles long with some rolling hills and three corners, two of which kicked quickly into punchy, steep climbs, with the finish line just over the crest of the final hill. The wind and the terrain made the races very tactical, and positioning in the pack was everything. Most fields quickly broke up into a lead group, with many groups of stragglers limping along behind.

Paul started things off in the men’s D race with a valiant effort to finish after a crash in the very first corner of his very first collegiate race. Kudos to him for picking himself up and finishing strong. Katy and Lucy then had a fantastic time in the women’s C race, rolling with a pack that was rapidly reduced to only a few contenders. They timed their attacks at the end well, taking second and third in the bunch sprint.

The men’s B race was Justin’s chance to finally show off his great time-trialling skills into the wind. The field was reduced to about a dozen contenders by halfway through the race, when Justin attacked out of a corner up a steep climb to escape the pack. He rode solo for around twenty minutes, while I had fun in the pack, getting in everyone’s way, disrupting the chase and causing several other racers to shout at me, a sure sign that it was working. Every now and then he appeared in our sights up the road, but the wind made bridging difficult, and none of the other teams organized a chase. He rolled in ten seconds ahead of the pack for a famous victory, while I came in 9th. The circuit race ended in bright sunshine and 60 degree temperatures, with Jen earning 5th place in a women’s A race that splintered quickly, and Emerson hanging on to the men’s A pack and winning a sprint in his small group to come in 14th.

Late in the afternoon, the second race of the weekend was a highly unusual mass-start hill climb. Was it a race? Was it a time trial? No-one was really sure. The first mile and half was flat and gentle, before the road picked up to some rolling hills, ascending gradually to a flat finishing stretch. Most fields disintegrated quickly on the climb, but there was still an advantage to be had from drafting for those who could stick together. Most of the team recorded top ten finishes, including 3rd for Paul in the D field and 2nd for Katy in the C race. Several of us set 20-minute power records, a testament to how hard the fields were pushing it.

On Sunday we awoke to much colder temperatures, and even higher winds, with gusts up to 50 mph. The main feature of the original road race course, Horse Killer Road (an incredibly steep climb) was out of action due to downed power lines. The ECCC and Shippensburg organizers did an incredible job throwing together a different course at the last minute. It featured some steep climbs, forested descents, but most importantly fierce cross and head winds on the back stretch. Most fields very quickly fell apart into smaller groups, and even gaps of two or three meters felt impossible to close. Breakaways were remarkably difficult to shut down, with tactics, positioning and awareness of the wind  once again crucial.

The winds were especially bad for the early races. As the A and B riders sheltered indoors, C and D racers gradually returned as if from a war zone, with riders being literally blown across the roads and into ditches. Paul came in 9th in the D field, while Katy truly shone in the women’s C /D race, breaking away in the first couple of miles with a D racer and never looking back. At the end of the race it took her a long time to be convinced that she’d actually won the C race! In the men’s B race, meanwhile, a break at the end of the first lap quickly split the pack, and Justin made it into a lead group that was whittled down to four, with one rider out front. The lone attacker was eventually reeled in, and Justin kept his powder dry until the end, where he followed an attack up the final climb, and eventually powered past his opponent on the last downhill for a tremendous victory. I came in 6th behind the first pack, while Jen won a bunch sprint for a brilliant 3rd place in the women’s A field.

By the end of the weekend, we were all tired but happy, and thrilled to win the weekend omnium with only seven racers, all of whom contributed points. We celebrated in style with ice creams (or were they custards? I have no idea) at Rita’s before hitting the road. All in all this was one of the best collegiate race weekends I’ve done. Terrific courses, testing conditions and a beautiful location. Congratulations to Shippensburg for putting together such a great set of races, and for rolling with the punches on Sunday to produce a plan B that worked out nicely.

Next up, the team is off to Dartmouth and UVM for L’enfer du Nord (the hell of the north!). We’re bringing over 20 racers including several first-timers. It’s going to be epic.

Eight of our team members will be racing at the USA Collegiate National Championships this week. They are on their way today to Asheville, NC for the races. Good luck to our team of:
Anne Raymond
Corey Tucker
Jen Wilson
Julie van der Hoop
Andrea Tacchetti
Emerson Glassey
Phillip Kreycik
Zachary Ulissi
There is a road race on Friday, criterium on Saturday and team+individual time trials on Sunday.
To follow the team, you can get news and results at the USA Cycling website: https://www.usacycling.org/2015/collegiate-road-nationals or through their twitter feed @USACcollegiate, and of course via our own twitter, @mitcyclingteam (warning: the latter may be filled mainly with pictures of people eating barbecue…)
Congratulations to the team members, good luck, and thanks to all of our sponsors who have made this trip (and season) possible!