by Matt Smith
Army was my third race weekend of the season (or ever, for that matter) and I came home very happy with the results! I raced in the D category and won the circuit race, placed first in the uphill ITT, and finished third in the crit. I also joined the C riders for the TTT (shout out to Sam and Kuat) and we came in second to a group from Army.

The circuit course at Army was a ~2 mile loop with the start/finish line at the top of a hill. After the start, riders went down a relatively long, winding, technical (although not super steep) descent over some pretty beat up asphalt. After flattening out about a mile after the start, the course turned sharply right onto a straight stretch of highway that had a slight uphill grade. The course then made another sharp right turn into a short but steep hill that would, in the words of the race flyer, “test the warrior within”. This final hill had four(ish) sections: a steep incline after the turn, a false flat, another steep section, and then another false flat. After the climb and a quick left turn, riders were back at the start/finish.

A huge part of my win was that particular hill and Adam’s expert advice on how to deal with it. Adam and I spoke before the race and he suggested that I start the hill near the front of the pack, then “sag climb” during the ascent so that I would be near the back at the top. He explained that by allowing the other riders to take the hill harder, I could conserve energy until the last climb of the race when I would be relatively fresh and could attack into the finish.

After the start we began down the first descent and by the bottom I had worked my way to third or fourth wheel for the highway stretch where the pace was pretty calm. I was in a good position going into the first hill climb and gladly allowed most of the riders to pass as they pushed hard up the incline. On the descent I worked my way to the front and was back at third wheel by the time we hit the highway again. The short course didn’t give a ton of time to make my way up to the front and I often found myself in the wind on the downhill part. I started worrying that I was using too much energy to make the final climb effective. Fortunately, the group seemed to take the straight highway section at a more relaxed pace and I could normally collect myself (physically and mentally) there.

I managed to repeat this pattern of sag climbing and getting back to the front over the first four laps of the five lap race. Each time I got to the hill I was grateful to hear Adam and Katie yelling feedback on how I was doing. As I approached the crest and start/finish area, the shouts of encouragement from the other MIT folks were also a huge boost!

On the final descent I made it to third or fourth wheel again and used the highway stretch to pump myself up for the final climb. As we got within 500 m of the climb I started thinking “this is going to suck” but I didn’t have time to think for long, since a Millersville rider came up fast on my left and started going for it. I stuck on his wheel and went hard through the right turn into the first steep section. He began to fall away and I pressed past him into the first false flat. A Hamilton rider then came up on my left, so I followed him into the second steep part of the climb, pushing past him as hard as I could while he started slowing. Cranking through the last bit of the climb and into the left turn I knew there was a chance that I had held off the other riders. But I didn’t want to risk turning around to look so I kept pushing as hard as I could through the finish line. I heard the announcer call the race for MIT and almost couldn’t believe that it had happened! The combination of exhaustion, tunnel vision, and happiness made the whole thing seem a bit surreal. 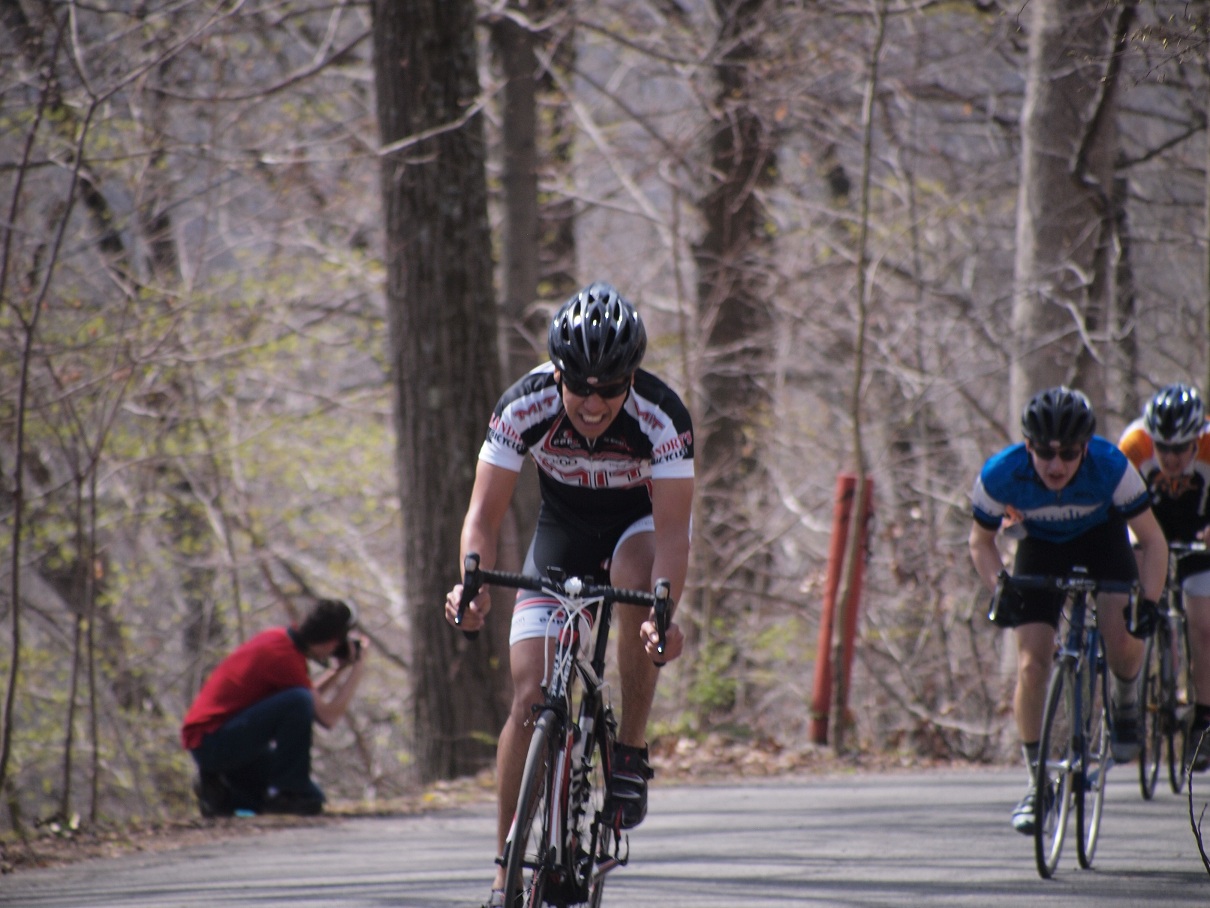 Winning was a fantastic feeling and I am incredibly grateful to Adam for his advice not only in the circuit, but also in the crit (“Be aggressive.”). In retrospect, having a plan really helped me navigate a smart, efficient circuit race, especially compared to my earlier efforts where I didn’t have anything particular in mind. I have to say that riding with MIT has been a tremendous learning experience and my success last weekend was due in no small part to the support and positive attitudes of the other riders on the team. It’s rare to find a group that is so talented and accomplished, yet so welcoming of newcomers. I’m looking forward to stepping up the fun (and pain?) next week as a C rider!