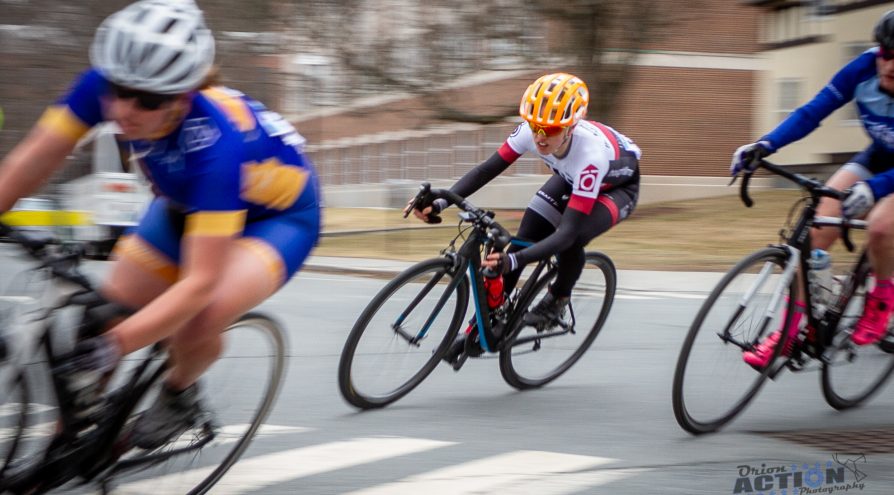 For our third race weekend of the season, we headed north for L’Enfer du Nord. MIT was a force to be reckoned with, bringing 19 riders including 5 first-time racers! A huge thanks to @orionactionphotography for taking some of the pictures in this blog.

Saturday featured an individual time trial and criterium held on Dartmouth’s campus. Here is Carolyn’s account of the day:

“When I started out going on leisurely coffee rides with MIT cycling this fall, I thought to myself, ‘this is fun, but you’ll never catch me at a race.’ So then why was I helping load up cars at a Quality Inn in Quechee Vermont at 6am on a Saturday? I was asking myself the same question. But early doubts (and early wake-up calls) aside, it was one of the best weekends I’ve had in a long time.

The racing was split over two days, with Saturday being the individual time trial (ITT) and criterium. We arrived early enough on Saturday morning to preview the 3.5 mile ITT course, which featured a half mile climb out of the gate and some residual snow from the night before. Since I had never raced before, I figured this was my best opportunity. Unlike other events, this required little strategy: just go all out (I believe the technical term is ‘full gas’ – I learned a lot of new vocab this weekend) for 10-12 minutes. I think I more or less achieved that goal, based on how truly awful I felt afterward. I was able to pass two riders on the first climb, and ended up in 4th in the women’s Ds.

The crit was the event I was more concerned about, since the potential for catastrophe seemed high. In the end, it was really just a 30 minute blur. I was vaguely aware that three riders attacked at the start, but I kind of lost track of them halfway through (had we caught them? I wasn’t sure. My mental game needs some work). But a real highlight was working with two MIT teammates in the last two laps (Cat Romero and Julie Takagi) to collectively finish strong (5 for Cat, 6 for me, and 11 for Julie).

Plus, once this race was over, the real fun could begin. We set up snacks and camp chairs along frat row and watched the rest of the action unfold. MIT had some strong performances across several categories that made spectating and cheering a lot of fun (a highlight was watching Joanna nab second in the women’s A race on her home turf). It was really awesome to feel like part of a team. I’ll be back next year!”

MIT had many notable performances over the day:

On Sunday, we headed to Middlebury, VT for the road race. Here is Liam’s account of his race:

“I was super excited leading up to this weekend — I raced the Dartmouth crit last year for the first time and loved it, and the road race course got snowed out so it was great to finally have the opportunity to race it. All of my racing success last year came when I made it into a breakaway, and I was determined to make it into a break during the crit and road race. Unlike last week’s Men’s B races at Bucknell, both of our races started off pretty hot from the gun. In the crit, McGill cycling hit the front just a few seconds into the race, a sharp contrast with the relaxed and chatty first few laps of the Bucknell circuit race. I got in one move and was off the front for an entire lap, taking a prime, but ultimately nothing stuck and I finished in the middle of the bunch after losing my position for the sprint. I was a little frustrated because I knew that my legs were good, yet the cards just didn’t line up during the crit.

Sunday’s race was held in the beautiful Vermont countryside near Middlebury College — it was probably the most beautiful course that I’ve ever ridden, but unfortunately I didn’t have much time to take in the scenery during the road race. A lone rider from Columbia went up the road just after the neutral start, and the pack spent the first 15 miles of the race slowly pulling him in. Again, I knew that I wanted to make it into a break — I attacked once, and followed another move, but ultimately both were caught. Just after the second move was caught, however, another move went — and I could tell that this one would probably stick because of the riders in the move. I bridged up to the five-man move, and the next ten minutes were completely full gas as we tried to establish a gap from the group of riders behind. The next 30 miles were really tough riding, but thanks to some expert handups in the feedzone (thanks Nic and Dmitro!) I was able to stick with the break.

The finish was on a slight incline after a big hill. I just barely managed to hold the other riders’ wheels during the flurry of attacks on the hill as we got closer to the line, and timed my sprint just right to take my first win of the season! Having so many teammates at the finish line made it a truly special win. The real highlights of the weekend for me, though, were watching Tori nail her sprint and win the Women’s A race, and getting to know the many new racers who came out for their first ever race weekend with MIT Cycling. I can’t wait for ECCC champs!”

The women’s A riders also dominated the road race with Tori winning and Amy finishing close behind in 5th. In the Women’s C, Sarah came in 2nd and in the Men’s C, Miles placed 4th. In the Men’s D, Jeremy, Guillaume, and Jack took 9th, 10th and 11th places and in the Women’s D, Catalina snagged 9th.

This weekend, some of our riders are braving the long drive to Shippensburg, PA to tackle the “Horsekiller road race”, featuring the steepest climb of the season.