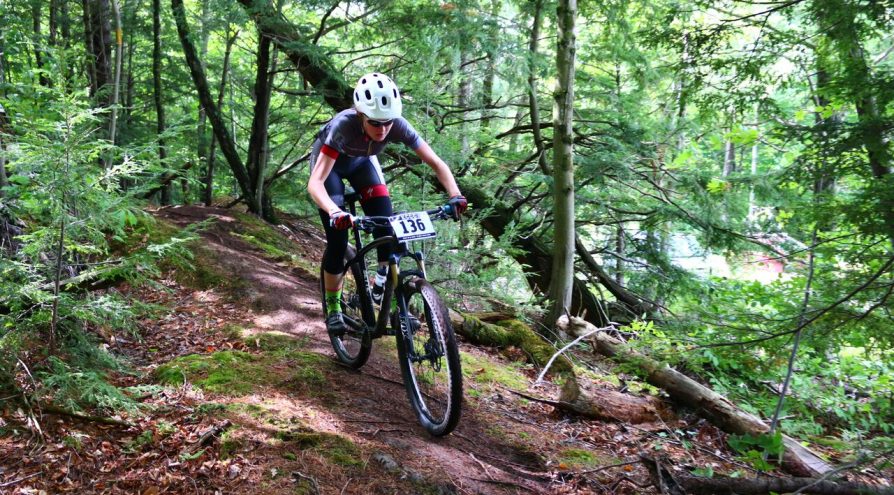 Back in the beginning of the summer I got an email from our captain Lucy with the subject line hey, want to run Shredfest? My initial response was something along the lines of UMMM I just bought a mountain bike like 2 weeks ago that I’m pretty terrible at riding, let alone racing, and you want me to organize MIT’s mountain bike race? But some crazy part of me ended up agreeing to take this on along with the help of Ben Eck and Lucy, and I’m so glad I did.

[PS if you want to see more photos from the race weekend (hundreds!), head to Dropbox]

After lots of organizing, paperwork, and some trail work, fast forward to race weekend—driving out Friday, walking the courses at sunset while leafblowing and taping, returning back to Zoar outdoor to set up camp and start grilling (with Ben Eck as grill master extraordinaire)!  I was so grateful to have more than 20 racers and volunteers come out to support – I can’t give enough thanks.  Saturday morning we packed up and headed up the mountain for the XC.  This year’s course was a relatively long loop of 4.2 miles of mostly smooth singletrack, but with some pretty difficult technical sections thrown in the mix, most notably a descent on the Silver Doe trail and parts of Estranged Moose (the trail name we are still trying to decipher).  Our team had a great showing, scoring tons of points in lots of different categories.  Our two women’s A’s both finished strong with new freshman member Kate Lawrence in 2nd and Lucy coming in in 8th.  The women’s B’s included former captain Beth Hadley, and first time racers Laura (me!) and Grace Copplestone (who ended up winning!).  In the men’s Cs Carson Teale and John Rom both picked up top 10 finishes, and in the men’s Bs, PK and Matt Carney both ran into major mechanical problems, but still finished the race and picked up some points!

In the afternoon we drove back down the mountain to start the dual slalom, which consisted of a steep grassy start with a drop, some gravel/ grassy turns, followed by a long series of berms and pump track.  Because it was rideable on pretty much all types of mountain bikes, lots of people decided to try it out and it made for a super fun race and great atmosphere for spectators.  We had many MIT racers make it to the final rounds, and was really exciting to watch all the close finishes. After the dual slalom, the team decided to head over to the Shunpike to go sunset swimming in the Deerfield River (who needs to shower anyways?), and then headed back to Thunder Mountain parking lot for grilling, round 2 (this time, with a multi-team bonfire, music, and s’mores!).

Sunday started off with some pretty strong thunderstorms, delaying the short track an hour and making the trails really loamy and slimy.  MIT women continued to kick butt, with Kate taking the win and Lucy in 5th in the women’s A’s, and Grace, Beth, and I getting 1st, 3rd, and 5th respectively in the B’s. Ben decided to don his fells loop racer jersey and give the men’s B race a go, coming in 2nd while PK also crushed it on the MITOC fatbike.  Afterwards was the team relay, where a team of 3 racers took one lap of the short track course each.  We were able to put together a team for both the A and B categories, and I think this race ended up being one of the best moments of the weekend. Afterwards many of us decided to ride down some of the more mellow downhill trails instead of driving down the mountain, which was a blast, and I got to experience my first “flow trail.”

Because the trails were so wet, the downhill course was changed from to a less challenging (but still pretty terrifying-looking) trail from the top of the lift.  We hiked up the mountain and spread out marshals throughout the course, and watched as the riders blazed down one after another.  Both Lucy and Grace did amazing trying out downhill for the first time, while Sean had a top ten finish in the men’s As.  Afterwards, Ben Eck broke out the grill again and we hung out on one of the ski slopes for a while with Sully and his dog.  Then it was time to head home, and I realized how kinda sad it was to leave Charlemont—the woods there are so remote and beautiful, snaking with miles and miles of amazing singletrack— and I can’t wait to get back there for Shredfest 2017!

This weekend was not only my first time racing mountain bikes, but also my first time organizing a race, my first experience with the crazy awesome mountain bike culture & race atmosphere, and for sure my funnest weekend with the team so far.  And it also confirmed that I’m admittedly quite addicted to mountain biking.  I won’t lie—especially as a beginner, mountain biking can be really scary, like you’re learning how to ride a bike all over again.  But that’s part of what makes it an incredible sport- you try things that scare you a little bit (or a lot), and sometimes you fall and get banged up, but many times you ride things you thought were unrideable and it’s a super amazing and rewarding feeling.  I’d REALLY encourage everybody to give it a shot this fall. Mountain bike season is upon us!