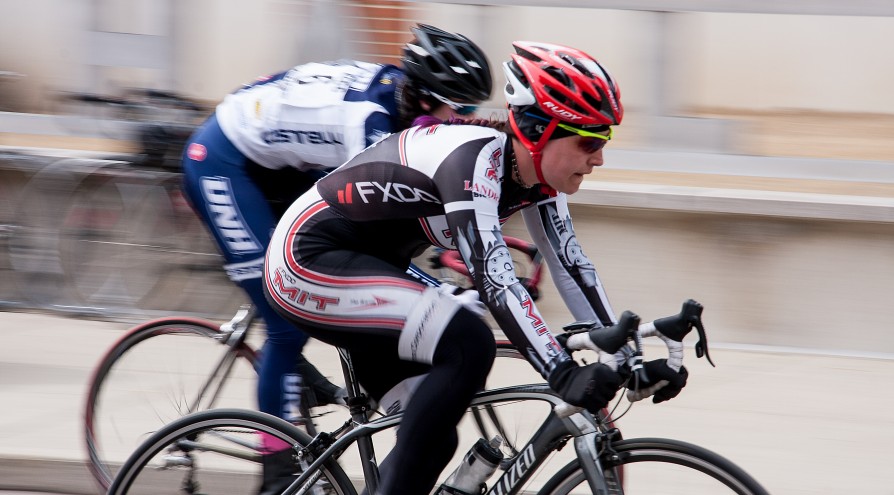 “This race will be good for you!” a phrase I had heard a few time recently but had yet to really believe. It was the Temple Crit, the first non-hill-repeat criterium of the season. Relatively flat, fast, four cornered, and a tad more frigid than the balmy 60*C road race of the previous day.  According to my teammates, corner 4 was to be decisive: if you could brave the strong wind between corners 3 and 4 and get around the corner clean you would be well set up for a sprint prime.

With that in mind, I took my place at the start and as the gun went off, wormed my way near the front of the group. It stayed rather calm for the first few laps until the first prime bell rang. Everyone tensed up and began watching each other. I saw the fastest riders start to move around for position. Cecilia from Columbia was positioned third on the slight downhill between corners 1 and 2, directly behind Shaena. I quickly moved to her left forcing her to take a tempered inside line on the corner if she didn’t want to be boxed in. She saw what was happening and jumped after the turn. I jumped to follow with   Shaena on my wheel. Coming around turn 3, Shaena came around me and went in pursuit of Cecilia just as Lenore from Columbia also came around. I sprinted around turn 4 and was able to hold on to fourth position for double prime points.
Cooked, I drifted to the back of the pack and took a lap to recover, during which time Cecilia, Shaena and Lenore took off (as they seem to have a tendency to do this season). After another lap I worked my way up to second position. I asked around what had happened on the front with the break and once I learned who had gotten away, I settled in for a one of my favorite games: Blocking! (Who says you can only play games on the Track?)
“We can catch them if we work together!”shouts one of the other girls in the pack. Ha! Good luck with that. A deviant in their midst, I proceeded to sabotage their plans. The lead rider tried to pul off, I kept her wheel. Another rider came around to pull I jumped on her wheel. Anyone decided to attack, I jumped and hopped to second wheel. About a quarter into the race I also remembered that I knew how to corner and, constantly in second position, was able to swing wide and hit the apex every time without wasted effort.
When prime laps came, I jumped right after turn 4 and won the sprint, getting fourth overall each time. I swear, if anyone had attacked me right after the primes, I would have been in trouble. As it was, it seemed like the pack was happier to see me on the front immediately after the sprint for a change and let me pull until the downhill when I quickly forfeited first position and reclaimed second wheel.
Finally it came down to the last lap. Between turn 2 and 3 a hoard of B riders attacked. I followed but many of them braked the through the corners causing me to take an awkward position for the final sprint. I ended up somewhere in the middle of the bunch and it wasn’t until after that I realized I had actually gotten 6th overall in the A field!! In the whole bunch of well-rested B’s only two A’s who hadn’t been in Shaena’s break had beaten me! I also learned later that Shaena had fallen off the front two and was working very hard to keep her separation from the pack and secure her spot on third.
Effective blocking, 6th overall, and 6 prime points total, I’d say this was a pretty good race for me!!